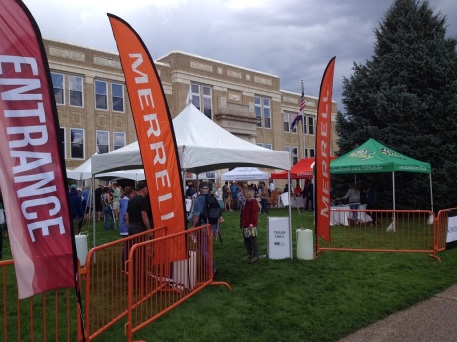 On Friday, August 8, wine- and food-lovers wandered the streets of downtown Steamboat Springs in the Stroll of Steamboat event, part of the 11th Annual Steamboat Wine Festival. There were 12 stops in all, which took strollers to art galleries, bars, restaurants – even a theater.

It was something like trick-or-treating for adults, where tasters went from stop to stop, collecting goodies that could fit in the festival wine glass and on the appetizer plates provided by Merrell, the event sponsor. Kind of like kids sharing tips on the best houses to visit on Halloween, strollers shared tips about “must-try” items while passing each other along the route.

The weather ranged from sunny to occasional downpours to a steady rain, which helped local merchants when strollers ducked inside stores along the route to stay dry — and emerged with shopping bags.

1. Historic Routt County Courthouse – It all started here, with check-in and collection of the coveted appetizer plate from Merrell. La Fiesta Grill & Cantina offered ceviche and chips ‘n housemade salsa to break in the plate. As for the glass, there were many choices. Two of them: Cline Mourvedre Rosé and Hess Treo Winemaker’s Blend. 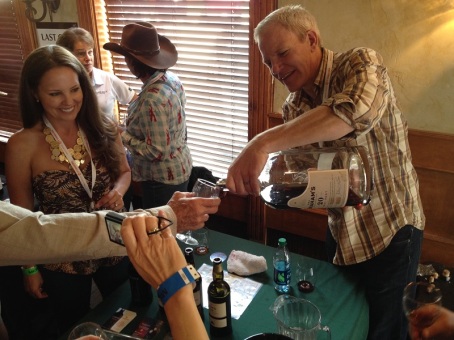 2. Old Town Pub & Restaurant – Live music set the scene for multiple choices of wine and an appetizer trio: Curry Chicken Salad Tartlet, Cucumber Round Topped with Shrimp Cocktail, and Strawberry + Brie Crostini drizzled in Dark Chocolate. One of the wine representatives poured tastes from a large-format bottle of Graham’s 20-Year Tawny Port – an act that drew its own crowd!

3. Mangelsen Images of Nature Gallery – It seemed fitting to sip the biodynamic Paul Dolan Zinfandel and Parucci True Grit Petite Sirah while looking at spectacular nature photography by Paul Mangelsen. It was easy to spend a lot of time gazing at images of scenery and wildlife from Mangelsen’s travels around the world.

4. Chief Theater – The lobby of this historic theater hosted one of the wine hits of the day, New Age Vino Blanco Dulce Naturel, which the representative paired with fresh lime for a “skinny” version of a margarita. Food from Harwigs included marinated zucchini on water crackers, oysters on the half shell, and a shrimp skewer. A downpour necessitated a closer look at a collection of artisan lamps and wine racks. There was even a combination lamp and wine rack!

5. Creekside Café – Word had spread quickly among strollers that the salmon rolls were among the “must-try” items. They did not disappoint, and paired quite nicely with Left Coast Cellars Rosé of Pinot Noir.

6. Circle 7 Fine Art – Karma Wine Bar offered a number of tasty appetizers on crispy flatbread – among them Tipperary Cheddar with Housemade Sundried Tomato Aioli, and Bresola with Lemon and Asiago. There were multiple wine choices to sip and sample while looking at the contemporary art, sculpture, and jewelry. 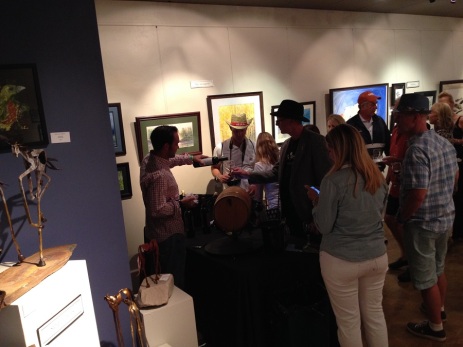 7. Aurum Food & Wine – Foie Gras Mousse with Berry Compote on a Toast Point! Like, yum. Rex Goliath Wines was there, distributing fantastic schwag in the form of tote bags, cowboy hats, corkscrews, and necklaces with the famous rooster medallion. A representative from Caricature Wines kept busy walking strollers through a tasting of their Red Blend, as well as the individual Cabernet Sauvignon and Zinfandel wines in the Red Blend.

Ah, more rain. This was the point when some of the restaurants decided to pack up their food items. The open-air food stations became too great a challenge during the periodic downpours. For the rest of the walk they sat vacant and drenched. Next year!

9. E3 Chophouse – Fantastic setup along the Yampa River with Adirondack chairs at river’s edge and a fire pit, but dampened by the rain. Strollers who were not too put off by the then-drizzle stayed around the fire pit.

10. Carl’s Tavern and Eureka – It was really raining now. What was left of the outdoor wine event moved indoors to the crowded restaurant with a throng of hungry people waiting for dinner tables. A waiter passed by with plates filled with some amazing-looking pork chops, so it was easy to see the attraction.

Alas, we missed visiting Mambo Italiano and Low Country Kitchen, which had rave reviews from strollers who had walked the route from #12 to #1 to avoid the crowds.

The rain curtailed some of the festivities, but strollers were in high spirits throughout the route. After Last Call, the sponsor restaurants filled up quickly with strollers eager to relax and share stories about their wine and food experiences.