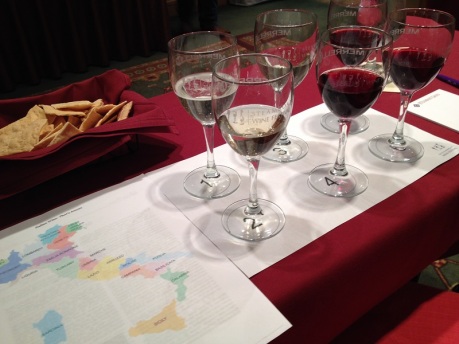 “That’s Amore” – one of the seminar offerings at the 11th Annual Steamboat Wine Festival – was a review of wines from the top-producing regions of Italy, which has been in the wine business for some 3,000 years. Host Jamie Adams of The Sorting Table led a packed house through a survey of six Italian wines. We traveled quickly from the Treviso region to Abruzzo, Serralunga d’Alba, Tuscany, and points beyond.

Adams introduced The Sorting Table as a wine distributor that specializes in organically or sustainably produced wines from small, family-owned wineries in Italy, Spain, France, New Zealand, and California. Tasting all six was a treat. 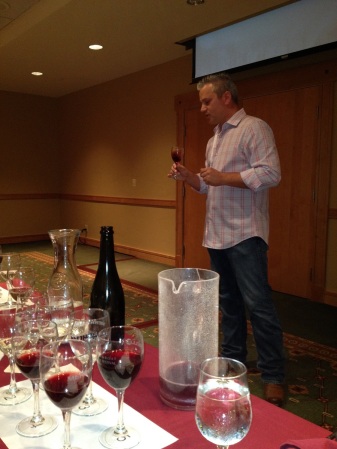 1. Treviso
Prosecco has become almost synonymous with Italy. This has not necessarily been a good thing in the eyes of the Italian wine industry, due in part to some lesser-quality wines that had been labeled Prosecco. The term “Prosecco” has since been limited to wine made from Glera grapes and produced in the traditional style in the Treviso DOC appellation.

We sampled Borgoluce Valdobbiadene Prosecco Superiore DOCG Brut, made from 100% Glera grapes. It had a sweet fragrance, with floral notes, yeast, and vanilla. On the palate it was dry, crisp, and high in acid. This wine would hold up well to rich foods. 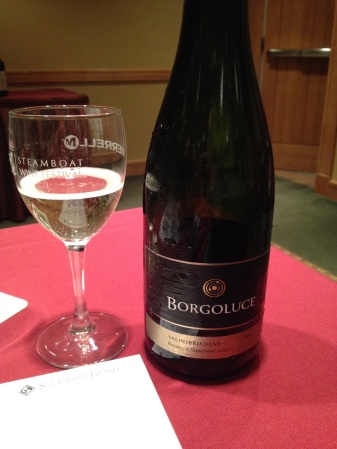 2. Abruzzo
This region is known for its rolling hills and proximity to the Adriatic Sea. Grapes were cultivated there in Roman times. The wines are cool and crisp, coming from limestone soil and ripening in the maritime climate. This adds what Adams described as a “sea-salty” character to the wines.

In 2000, winemaker Riccardo Tiberio purchased 8 hectacres of old-vine Trebbiano Abruzzese in the Montepulciano d’Abruzzo DOP. Today his son and daughter, Antonio and Christina, manage the winery.

We sampled Tiberio Pecorino IGP, made from 100% Pecorino grapes. Similar to the cheese, the grapes are named for the sheep that graze the steep hills. The wine smelled of citrus and tropical fruits and offered a balance of fruit and acid.

3. Alto Aldige
In the far north of Italy lies a region nestled in a valley between the Rhaetian Alpa and Dolomites. It is close to Austria and has a history of diverse fruit cultivation. Pinot Grigio is grown in the region; Santa Margherita Pinot Grigio is produced there.

We sampled St. Michael-Eppan Sauvignon Lahn. It had a nose of sunkissed herbs and grasses, as well as ripe pineapple. It tasted of lime, mineral, and tropical fruit. St. Michael-Eppan is a wine co-op of more than 350 growers. The grapes were sourced from the Lahn Vineyard, which is known for its lush fruit. Winemaker Hans Terzer is recognized as one of the best winemakers in the world, and this wine is one example of why. 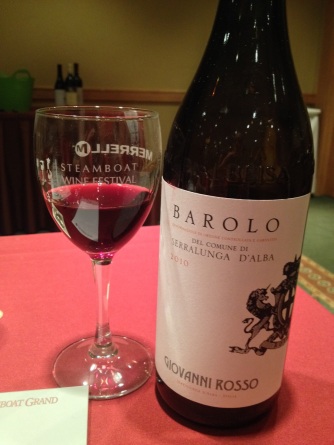 4. Serralunga d’Alba
One word: Barolo. The Piedmont region is prized for its wines made from Nebbiolo, Barbera, and Dolcetto grapes. The family of Giovanni Rosso has bucked the recent trend of producing huge New World-style oaky Barolo and is producing more subtle and refined wines aged in 2500 liter neutral oak casks. Adams described how this results in rounder, softer wines that retain their structured character.

5. Chianti Classico
Tuscany! Adams said this region leads Italy in tourism. He polled the room and found most had visited Tuscany and most had sampled Chianti wines. Some of these grapes are grown on hillsides so steep they are terraced. In order to be called “Chianti Classico,” by law 80% of the grapes in the bottle must be Chianti Classico.

We sampled Castello di Ama Riserva Chianti Classico. Named for the “castle of love,” it smelled and tasted of cherries, earth, and spice. It was a far cry from the wine in a straw-covered bottle that when empty becomes a candle holder!

6. Montalcino
Tranquility. The bucolic nature of the region and its vineyards, olive groves, and wheat fields appealed to Giancarlo and Nuccia Gloder. In the 1970s they invested in Montalcino as a getaway from their busy lives in Milan. The Gloders planned to produce two Brunellos, a traditional wine aged in Slovenian oak for three years, and a modern style aged in 500-liter French oak tonneux to minimize the role of oak in the aging. Around the time of their first vintage, Gloder turned over the operations to his then 22-year-old daughter, Paola. She made the bold decision to age the wine in new French Oak, which gave the wine a nuanced complexity. They named this wine Altero for “self confident.” At first her Altero was more prized than her Brunello, and sold for $10.00 more per bottle.

We sampled Poggio Antico Rosso di Montalcino. This wine is essentially Brunello with less time spent aging in oak and in the bottle. Think of it as wine for the impatient. Winemakers release Rosso earlier to drink while everyone waits for the Brunello to be released. Made from the same grapes, Rosso serves as a sneak peak of that year’s Brunello vintage, but is more affordable. The nose was a lush fruit basket of red and black fruit. It tasted of tart red fruit with balanced acid and tannins. This glass disappeared quickly!

I did say tasting these wines was a treat. 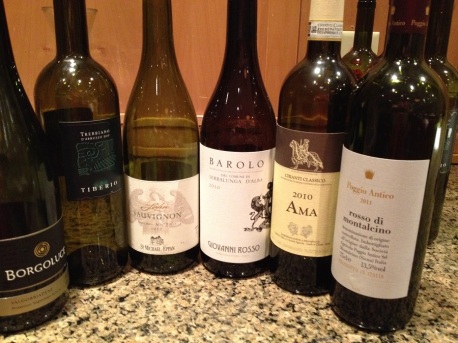 Until our next adventures in wine and food…..